We have just released a new beta build, with the following changes:

You can download them below with complete instructions here:

By the way, if you’re having trouble choosing a hero or faction, here’s a quick card guide. We’re still working on implementing this in-game, but hope this screenshot helps for now.

More people have also been checking out the game and posting their gameplay videos:

Thank you as well to all the new press we’ve been getting, including this interview with our artists Edwin, Jaq, and Jun on Xmashed Gear. Check it out to see some concept art and WIPs of our heroes!

Please keep your comments and suggestions coming, and hope you’ll continue to share our project to your friends! We have currently reached over $4000, but still a long way until we complete our goal. And again, please do vote for us on Greenlight.

Legends of Callasia is back on Kickstarter and goes to Steam Greenlight!

December 14, 2015 – Southeast Asian virtual game studio Boomzap Entertainment launches its Kickstarter campaign for Legends of Callasia, a cross-platform fantasy world conquest game with board game-style mechanics and no hotseat waiting. Beta access is open to all as part of the Kickstarter, and a Greenlight campaign on Steam is also ongoing.

Legends of Callasia (formerly known as Legends of Fire & Steel) is a simultaneous turn-based single and multiplayer fantasy world conquest strategy game with no hotseat waiting. Choose from a wide range of heroes from three factions – The Hundred Kingdoms, The Faeborne, and The Revenant – and conquer lands through single player campaigns, or battle against friends through online multiplayer in board game-style maps. Use bonus cards against your enemies or boost your armies and rule the world!

The game is designed to be playable on PC, Mac, iPad, and Android tablets. Boomzap co-founder and Creative Director Chris Natsuume says, “Our hope is to make a mid-core casual game that captures some of the fun of more epic strategy games like Civilization, Crusader Kings, or Heroes of Might and Magic, but in a much smaller, more digestible, 1 hour play session.”

Known for casual games, Boomzap is now making its entry to the strategy games market and is hoping to build a multiplayer community on Steam. Funding through Kickstarter would also help in completing development of the game, set to release in early 2016.

Make Legends of Callasia a reality by backing their project on Kickstarter and rating the game on Steam Greenlight. The team is asking for support in spreading the news in order to reach their funding goal of $25,000USD. Pledges start at $1USD, and rewards such as early release copies, digital artbooks, and customized in-game content are available to the backers.


Comments Off on Press Release: Legends of Callasia on Kickstarter and Steam Greenlight

Legends of Callasia is now live on Kickstarter and Steam Greenlight!

BETA access to the game is open to all as part of the Kickstarter. We hope you can support us! It would help us a lot if you can pledge and vote, and share the links to your friends in order to get the word out to more people (which means more players to play multiplayer with) and make this game a reality.

Here are the Kickstarter rewards available to our backers: 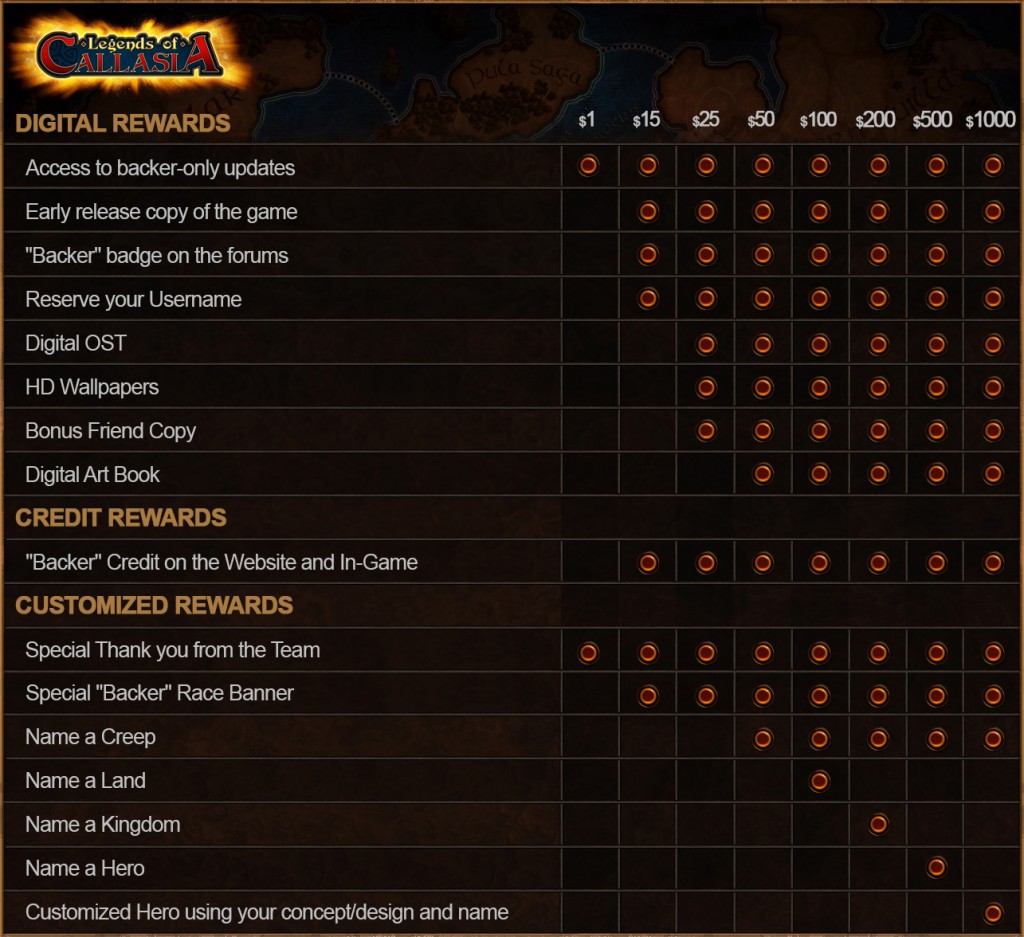 Thank you very much!


Comments Off on Open Beta, Kickstarter, and Greenlight now LIVE!