Inspired by classic turn-based strategy games like Civilization, Heroes of Might & Magic, and Risk, Legends of Callasia is a fantasy-themed world conquest game which adds an original simultaneous gameplay mechanic where players plan and resolve their turns all at the same time, allowing for faster games. 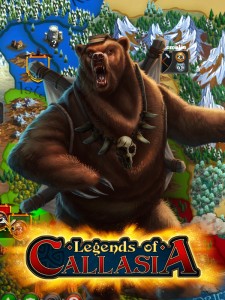 The Great Callasian War rages across the lands. Choose a faction and awaken the legendary heroes to lead your armies and destroy enemy forces! Build cities, conquer kingdoms, and form or break alliances on tabletop-style maps with bonus cards that can turn the tide of battle. Follow the story of the factions in single-player campaign missions, or test friendships in online multiplayer with an original simultaneous turn-based system that adds deep strategic elements in predicting other players’ moves. Fight your way to the top of the leaderboard, and dominate the fantasy world of Callasia!

Note: The free demo includes the tutorial, starter campaigns and heroes for each faction, and three maps for skirmish and multiplayer. The full version can be unlocked through a one-time payment from within the game or by purchasing the DLC.

Legends of Callasia: The Stoneborne is the first expansion, centered around a new playable Faction: the Dwarves.

As the Great Callasian War rages above, and more and more factions are drawn into the conflict, the Stoneborne have decided the time is ripe to retreat to their ancestral homelands deeper in the earth in the hollow cavern kingdoms of The Great Dark. What horrors, adventures, and treasures shall they find in these ancient lands? Only the bravest and stoutest warriors will ever know.

The expansion contains as much content as 1/3 of the main game, including:

Boomzap is a game development studio with developers working virtually from all over the world – predominantly Southeast Asia. Our founders Chris Natsuume and Allan Simonsen have more than 35 years of combined experience in the gaming industry. Since founding Boomzap in 2005, we have released a variety of games for several platforms including PC, Mac, Wii, iOS, and Android.

One thought on “About the Game”