Exciting things are happening this week for Legends of Callasia!

Tournament and Leaderboard Reset
Our rank-based tournament is just around the corner! In preparation for this event, we will be resetting the leaderboard rankings this week. Players must have the full version to unlock ranked multiplayer mode. Tournament details and prizes will be announced soon.

We are switching things up a bit on Twitch with a new schedule, and having long time fan and player Renegade_Pige join us as a regularly scheduled and officially sponsored streamer! We’re also having our Twitch party for the Stoneborne DLC backers, and a 24-hour marathon to follow our iOS launch. 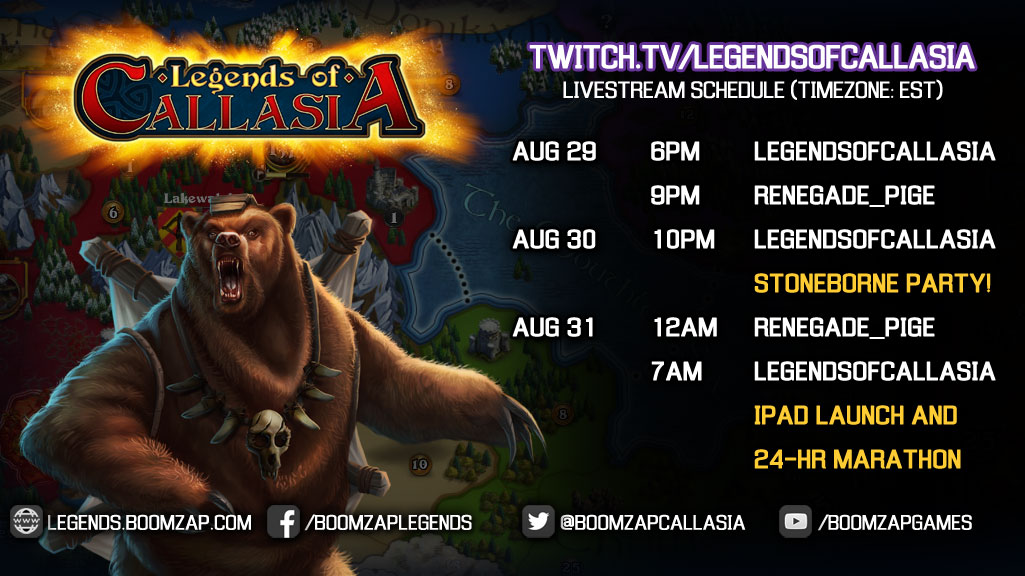 We’ve started sending out Steam keys and discussing name and hero ideas with our backers! Check out our latest Kickstarter update here where we show our WIPs. We are now also allowing additional pledges via Paypal! You can donate here: https://www.twitchalerts.com/donate/legendsofcallasia

We will be launching the iPad version of the game on Wednesday! You will be able to log in on the iPad version using your same account from the Steam version and carry over your game progress. As part of the launch, we will be having a contest for Callasia-inspired art! We will announce the details later this week.

—
For comments and suggestions, drop by our Discord server (discord.me/legendsofcallasia) and watch our regular livestreams on Twitch (twitch.tv/legendsofcallasia)! You can also email us at legends@boomzap.com or contact us through the in-game Feedback button.